(Before, we often have a bowl of porridge in the corner street, to calm our hunger, with boiled egg and sometimes with innards if we had budget. Today, with the high commodity prices and difficulty to find jobs, we can only afford half bowl of porridge, sans egg and meat)

Gina Petes, 52 years old, worked as a machine operator for 18 years in Donewell Plastics, the largest supplier of plastic products in Metro Manila and the country. She remained contractual, paid P280 (US $0.5.38) daily, while working for 12 hours a day in the company for 18 years.

In 2017 she was illegally dismissed. The management said that they had to let her go because as she gets older, she worked slower and failed to reach their quotas. She works in whatever jobs accept her.

Gina filed a complaint against Donewell Plastics Corp. at the Department of Labor and Employment (DOLE). At first, it seemed impossible to win the case, but with her perseverance and with sufficient knowledge about her rights she gained through the activities of organization, Women WISE3, she won and got her severance pay.

Meanwhile, Mae was not as`fortunate’ as Gina. Mae used to work at W.L. Foods Corporation – one of the biggest snack foods company in the country. In 2013, she got into an accident in the production area that cut her arm while inspecting a machine. The company did not cover her hospitalization. She filed a complaint at the Labor Department, but lost.  “Nakakalungkot na literal na buwis-buhay ang magtrabaho dito sa atin. Hindi makatao ang pagtrato at walang disenteng sahod ang mga manggagwa.” (Its sad that to work here in our country is costing life. Workers are treated inhumanely and are not paid decently.) Since then, she’s unable to land a stable job.

Gina and Mae are like  most women workers today, battling everyday to keep their meager income from unstable and unsafe jobs intact from attacks of skyrocketing prices. Access to healthy and sufficient food has not been the same since Duterte’s  TRAIN Law rammed into their already impoverished lives.

Gina knows well that it if she did not join Women WISE3, she could not have won her case.  Thus, she and her other female colleagues, reached out to others,  equipped themselves with understanding through attending seminars and other activities where they learned more about their rights as workers and as women. They actively campaigned against Duterte’s TRAIN Law and for the passage of the Expanded Maternity Leave (EML) Act . They all rejoiced when EML was finally enacted into law last February. “This is a victory for all women. We, ourselves, may no longer be able to reap the benefit of this new law, but we are proud that we are part of those who pushed for it,” Gina shares.

The work is not over yet. Many women workers are not enlisted by their employers to the Social Security System (SSS) despite 18 years work, like Gina. And SSS, with all its flaws is mandatory and basic social protection any worker can get. And yet, business owners were not pleased with the EML law, saying it is an added liability for women workers. They, in fact call it “anti-women,” as they warn that it will probably result to more discrimination against women, as they had been doing for many years. Women are not only discriminated in pay, but in employment opportunities. There are factories who fire pregnant women and others simply refuse to hire mothers.

The Social Security System (SSS), as if acting on cue, with Duterte signing EML into law, announced that it is raising the SSS contributions under the pretext of increasing the longevity of the semi-state insurance agency. The announcement drew flak, but still, it is going ahead with its decision.

“We will resist this new plan, as we know the SSS has billions in uncollected contributions from the company/ employers. Why burden us?  They should prioritize this, instead of adding new burden to members,” Malou Santos, Women WISE3 Chairperson says. “The priority now is to push the campaign for enlistment of all workers into all these social protection benefits, SSS, Philhealth and housing, as mandated by law. These are state corporations, corporatizing the workers’ money, and excluding workers especially women from a tiny benefits they can get from these funds is multiplying their exploitation. State should provide, social protection”, Santos added.

On International Women’s Day, Women WiSE3salutes women workers like Gina and Mae who continue to strive for a better future, not only for their own families, but for all. “We must act now, to make all the changes happen now, not in the future,” Santos asserted.

Santos also reminds that as mid-term elections, approaches, let us not forget those candidates who voted for TRAIN Law, for Rice Tarriffication Law that floods our country with cheaper imported rice, while our farmers are dying of hunger. She challenged all other candidates by walking their talk, in job protection, by intervening, supporting and addressing the demands of Sumitomo Fruit Corp workers who had travelled from Mindanao driven by militarization and Martial Law and been camping out in Manila for four months now.

“Duterte led many of us to believe that the workers conditions will be improved for the better. It was all lies. His misogynistic remarks are patent, that insulted more women, but led us to organize more. We will not be fooled again, by a government, who believed that honesty is not fundamental in governance,” Santos ended. 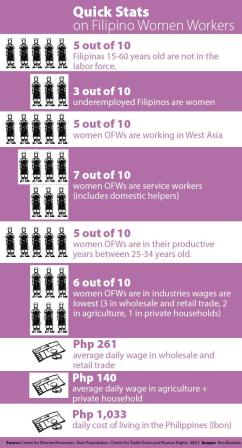 A mutual help and advocacy network of widows and families of slain labor activists, women trade union organizers and human rights defenders whose lives are under threat. It also includes women workers displaced in the exercise of their right to unionize and those who are victims of abuse and harassment in their own workplaces. More
%d bloggers like this: